So, yesterday I saw the movie Julie and Julia and suddenly got inspired to bring back my blog. The movie made me realise how much I miss cooking. For those who haven't seen the movie (which you better rectify soon! ), the movie shows parallel stories of two women named Julie and Julia. Julia Child is a famous author of the book Mastering the Art of French Cooking for Americans. The story goes that Julie, reads the book and does all the dishes in it in one year and posts about it in her blog. It's a really cool movie and one hat I think you should all see. So after seeing that, I got inspired to start cooking again.No, I won't be doing a challenge or even do French cooking. Nope, nothing of the sort, although I wish I could do french cooking. But getting ingredients to do french cooking here is really hard. Either the stuff is not there or it's too pricey. So, no, not many french recipes here, unless it has some common ingredients, like the French toast. Although I have to clarify that the French Toast isn't French (Yeah, I know, the people who name these things are stupid at times) Noone knows where it came from, which is my fun fact for today. Yes, French toast has mysterious origins, and funnily, they seem to have been made out of stale bread in earlier times. Anyway, back to the topic, I decided to post again here hoping I would keep doing that, because I miss cooking. It's always so fun to cook and much more fun to eat. So, here we have, Cookery blog, restarted edition!!!! I'm still thinking out ideas about blog posts, but I was also thinking of including a greater variety of dishes!!!

Also, I signed up for Bloglovin, which is a really nice place to start following blogs and finding other cool ones!
Posted by Merin at 02:30 No comments: 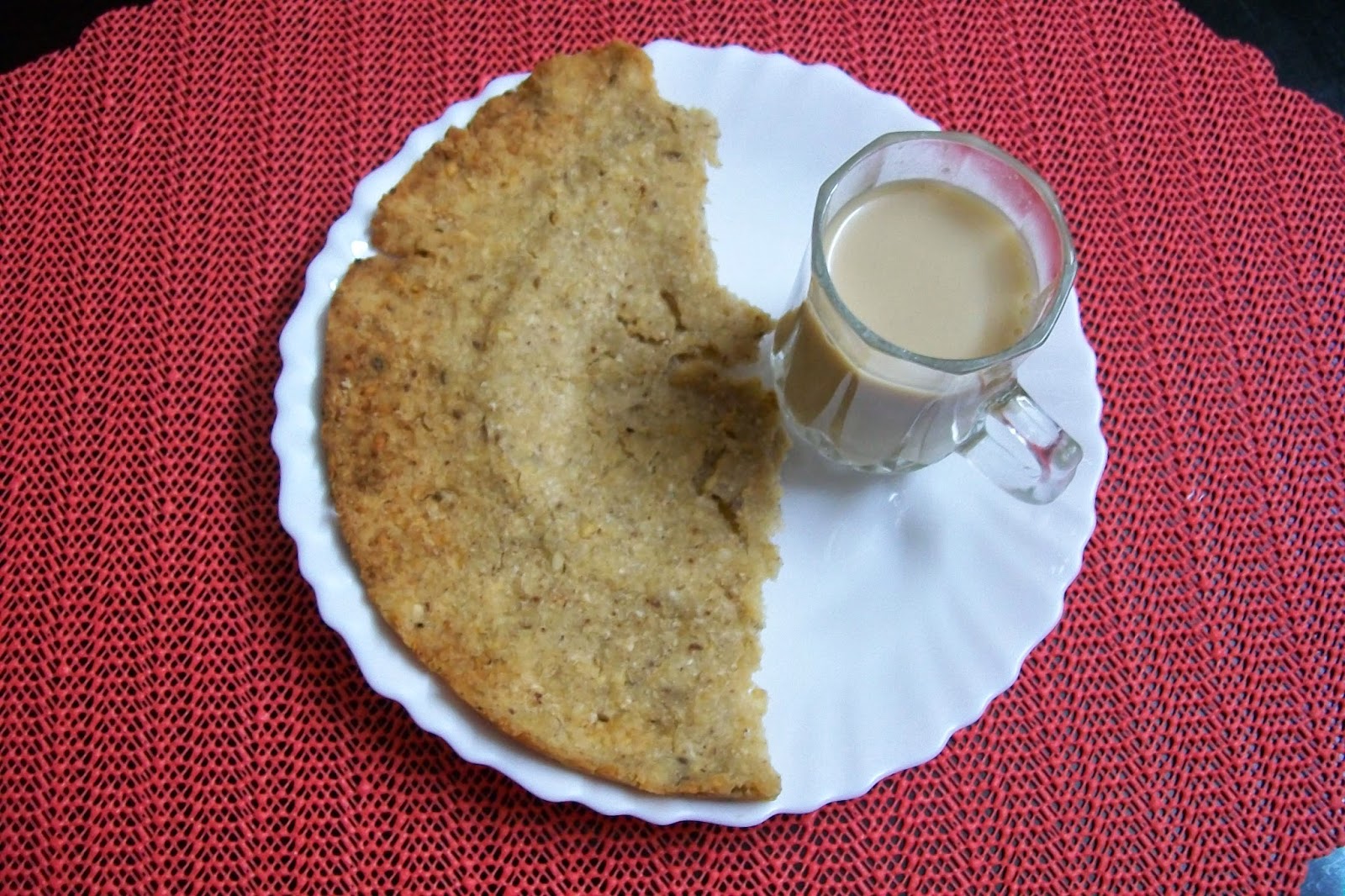 If you're confused with the heading, don't be. It's just the malayalam word for Maundy Thursday or Holy Thursday. Here in Kerala we celebrate it with eating a Pesaha appam (which is the semicircular pizza like stuff on the plate.) and Pesaha Pal (malayalam for milk) There are two variations for the appam , a steamed variety and a baked variety. I prefer the baked one, but it's upto you. Anyway, the head of the family, pour the Pesaha Pal into glasses and breaks he bread and serves it to the others. It's to remind ourselves or how Jesus poured wine and gave bread to his disciples in the Last Supper. It's an extremely tasty dish. Like I said, there are two varieties, the steamed variety is made more towards to south of kerala while the baked one is made more towards the north.It's called inri appam here. And just like in passover, it's unleavened.

In case you're wondering why that appam is semi circular, it's cause I remembered to take the photo only after eating the other half. That was a delicious other half.

Soak urad dal for 2 hours and grind it into a smooth paste by adding little water. Grind coconut with garlic, small onion and jeera with little water, until everything is combined well. Add salt & keep the water to boil, when bubbles start appearing add rice powder, little by little (vattikuzhakkuka) , making sure its not watery. The dough should be soft. Add urad dal paste and coconut paste. Combine everything well. The consistency of batter should be same as that of Idli batter. Transfer the batter to a well greased steaming tin. Place the cross made with palm leaves on the middle of the batter. Cover the tin with aluminium foil. Steam in appachembu/steamer for 18 – 23 minutes. Let it cool for sometime and then transfer to a serving dish. Use the same flame till the end, ie if you are using medium flame, cook on medium flame through out. 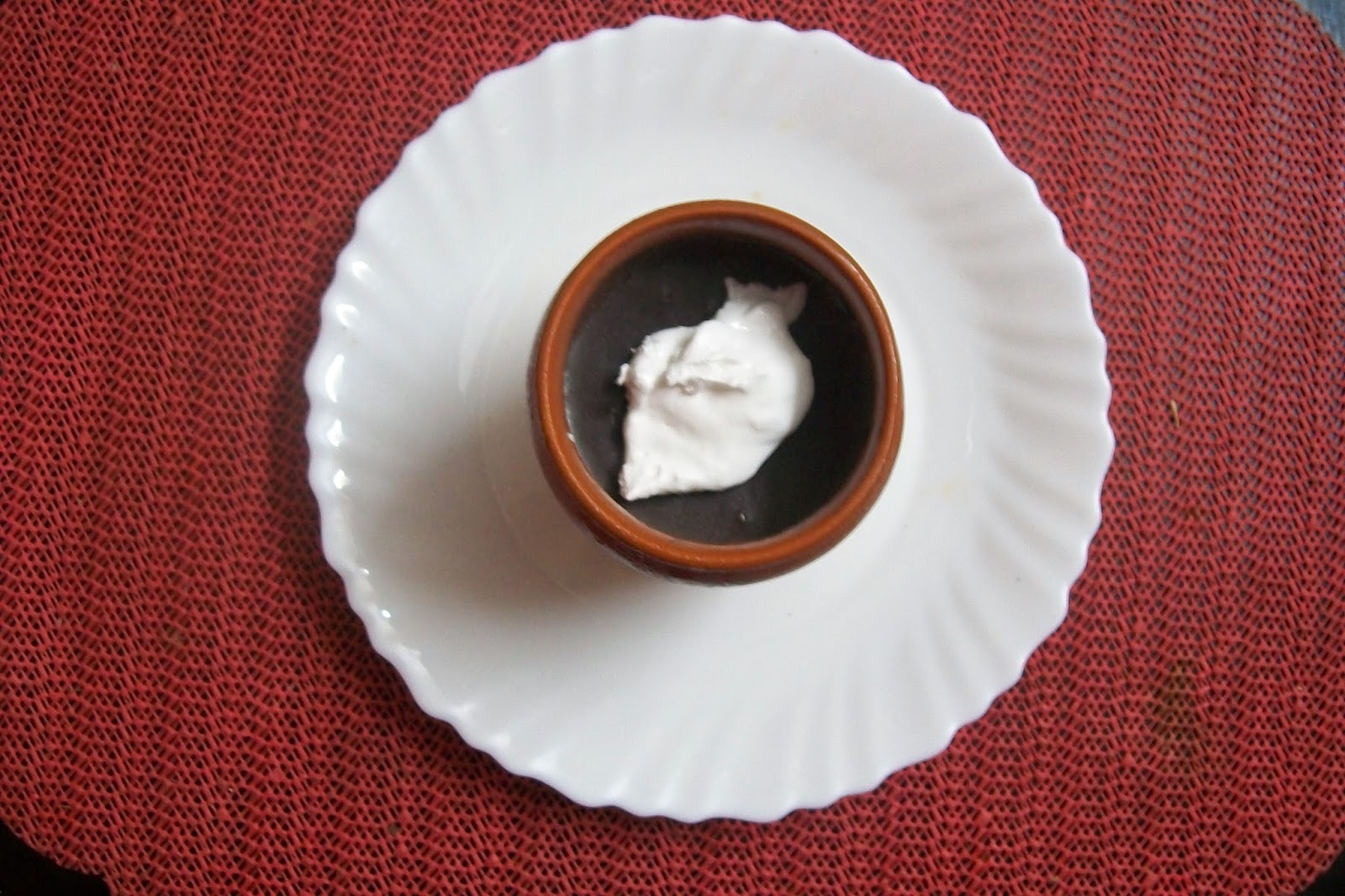 Recipe From Once Upon A Recipe

So, my Spring Break began and I decided to do my first recipe. Well, it's not first in my list, but I always begin with something sweet. (Cause I have a sweet tooth.) So, in the morning I was online and I wanted to keep surfing. Well, in short I was actually lazy to go and cook something. So, I remembered this recipe. It was simple enough, but I hadn't expected it to be tasty or anything, cause I never thought easy and delicious would come together. But this was like the MOST easiest to make. I mean, i've made simple dishes before, but most of them taste only average or are really not that easy. But this one was an exception. It was easy to make and tasted heavenly. And that's an understatement. That chocolate is velvety soft. And it melts in your mouth and if you're using semi sweet dark chocolate you needn't add sugar cause it tastes sweet without it. And I made this whole thing while surfing the internet with one hand. And I added a dollop of cream on top of it. But you need to do that only if you want. And I finished it now. I'm hoping to make more when my cousins come next.

I'm posting the original recipe here, but I didn't use liquer or salt, because I don't like liquer and I forgot to add salt. But you can try it using liquer and salt.

Easy Velvety Chocolate Pots
6 ounces dark chocolate (~70% cocoa), chopped
2 eggs
A pinch of salt
1 TBSP. liqueur (optional)
1/2 cup very hot coffee
In a food processor or blender, combine the chocolate, eggs, salt, and liqueur (if using). Blend until well mixed. With the food processor or blender still running, slowly add the coffee and blend until smooth. Pour the mixture into the dish you want to serve it in, and refrigerate until cold and set. Enjoy!

Spring Break!!! That time of the year when you're a free kid! I just love spring breaks, We call it Summer Break here in India. I think, cause it's Summer here. Well, the indian seasons are kinda confusing (for me!). We have Monsoon (which is when the rain comes.) and no Autumn, and very little Winter. And non eof them come in the right time as well. Like I said, confusing. Anyway, the break is when we have lots of time and practically nothing to do. So, I make lots of projects so I don't get bored.. Implementing them is another matter because mostly I have little attention span which means I end up not completing stuff I began . And as usual I have some recipes to try. I have a year long if recipes to try and with all the free time i'm getting I'm going to use them to get back to trying all of them out. And trust me it's a looong list. I haven't had had muse (yes, you need muse to cook.) to try these recipes but I'm gonna try them out now. So, what are these wonderful recipes, you may ask. I have a list which contain basically everything, from indian ones to international, from desserts to spicy savory dishes, you get the idea......These recipes are mostly from other blogs (unless otherwise said). I'll be posting the links as I make each of them. Of course i'll be substituting a lot of ingredients. The most important skill you get from living somewhere where you get very little ingredients

I'm sure you might be wondering what had happened to my endeavor. Of course it was supposed to work. Had I told that before I had gone on this endeavor I was told that it would simply go bad cause the climate here is more humid and flour with just water in it really tends to go bad. Did I listen? Nope. I was just too sure of myself that I really thought it would work. And so, the next day as I opened my lid I saw the liquid all bad and yellow. And I had to throw it out. And so out went the Sourdough Bread Endeavor!!! I think that perhaps i'll have to start with easier breads instead if the tough ones. So, i'm still searching for other good recipes but most of them seem to require starters. And when I find something as cool as this, i'm sure going to start again!

Recipe from The Kitchn

Yes, it's the great Sourdough Bread Endeavor. Don't know what that is? No worries cause I just invented that term a few minutes ago! My friend , Namitha of My Family And Me had posted a bread recipe. And that lead me check on a variety of breads. I had no idea there were so many breads. After a few minutes of looking at the recipes I settled on the Sourdough bread. Now, my tryst with the Sourdough Bread is years long starting from me watching the Home Alone 3 movie where the lady next door, whose name I forget, had brought  'The Famous San Francisco Sourdough Bread' and instead of bringing it home she had accidentally picked up the wrong baggage which had a toy car instead. Of course that's the reason the whole movie is there. So, as a kid watching the movie I was fascinated with the name imagining all kids of flavours wondering what that bread tasted like. We of course do not get any bread other than plain white bread and occasionally wheat bread here. So, I had always wanted to try that one.

And I met the Sourdough bread again just today while looking for bread recipes. And the whole recipe seemed challenging. And challenges are something I love. So, deciding to start making the bread, I began The Sourdough Bread Endeavour. I call it an endeavour cause it takes days to make and I am someone with 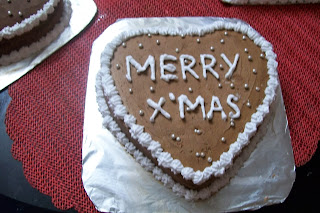 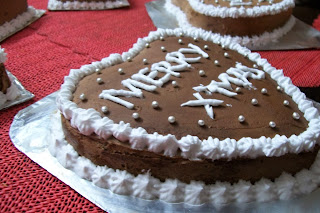 I hope Santa gives you loads of presents!

It's christmas and I thought I thought i'd begin my blog. It's been long since I had posted. And I'm starting with a little sweet. a cake. Or much better a Christmas Chocolate Cake. Now, this cake is pretty much simple. The icing I used is Whipping cream and it takes away the hassles of a butter icing! I hope you enjoy this cake.

For the Icing
Whipped Cream
Cocoa

Beat the butter and sugar until the mixture is soft. Add the yolk of the eggs and beat well. In another bowl beat the egg whites till they form stiff peaks. Sift together the Flour, baking powder, baking soda, and cocoa powder. Add it to the butter mixture. Mix well. Add the egg whites beaten and fold well. Pour into a cake tin and bake at 150degrees for 25 minutes or until ready.

Beat the whipping cream until soft peaks are formed, add the cocoa powder and beat well. The icing is ready!

Merin
I am a student of zoology in India.I like reading, cooking, painting, and mostly wasting my time. I've always liked eating and that led me start cooking. My favorites are pies and most things sweet, especially pies, and pies, and pies.